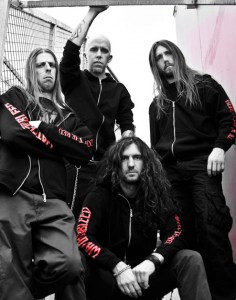 Building a kingdom…
In 2009 WATCH ME BLEED released their debut-album “Souldrinker”, which led to good reviews as well as many concerts and festivals throughout Europe.

Well done, but there was more on the minds of Markus Pohl (Mystic Prophecy), Steffen Theurer (ex-Symphorce) and the two shouters Chris Rodens and Alex Gindu.

Drummer Steffen Theurer said: „It was a real challenge for us to write a follow-up; ‘Souldrinker’ was good for a debut, but we wanted something different. We were looking for a producer and songwriting-partner, someone who would understand what we want and who would force us to give our best in terms of writing and playing“

In March 2011 WATCH ME BLEED teamed up with Producer Eike Freese to start writing songs for their new album. “No rules, no bullshit” quickly was the headline for the following six month of pre-production. Eike Freese became an important part of the band, and him not only being the producer, but being a full-time songwriting-partner made all the songs on this album something really special for the band.

After these intense months of writing new material, the recording started in October 2011. The band laid down ten tracks of head-crushing metal.

Shouter Alex Gindu about the whole writing- and recording-process: „Eike gave us the confidence to go beyond what we had done before, this time really unleashing the blood-red beast“.

Here come the red…
Heavy, raw and big – the new album was born. Its in-your-face with a big groove, heavy riffs and keen dynamics, and the powerful and aggressive vocals of two front men combine to produce an immediate and accessible slice of physical metal.

Combining technical finesse with raw power, melting Thrash- and Death-Metal to a heavy, riff-driven monster and delivering it with the force of a jackhammer – that is WATCH ME BLEED’s new album, their ‘Kingdom’.

Guitarist Markus Pohl commented on the album-title: “’Kingdom’ is our statement. It’s our world. Come in and find out. It’s a big ‘Fuck you!!!’ to all the people who can’t stand loud guitars, pounding drums and aggressive vocalists. That’s us, raw, heavy and loud”

Bottom line, Watch Me Bleed is heavy, pissed and raw – and if you like the heaviness and the groove of PANTERA and LAMB OF GOD combined with the mightiness of AMON AMARTH, do not hesitate to enter their ‘Kingdom’.